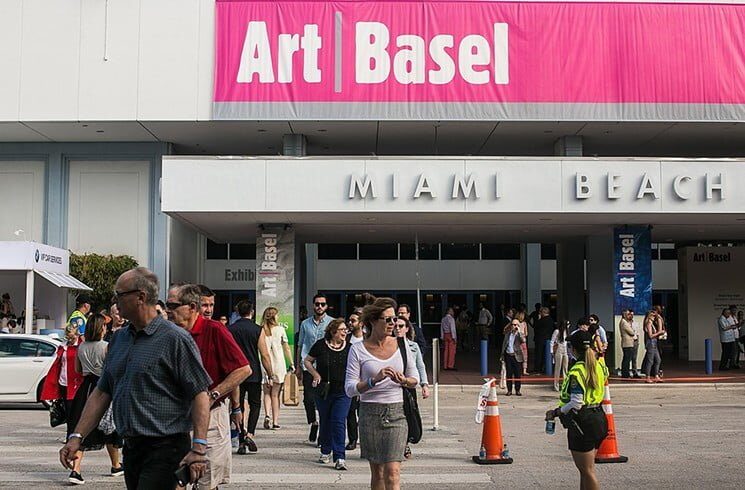 Real estate and art converge this week, as developers, brokerages and architects capitalize on the well-heeled crowd descending on Miami to boost the visibility of their luxury projects.

Christie’s International Real Estate, along with EWM Realty International, is a marquee sponsor of Art Miami and its sister event, CONTEXT Art Miami, for the eighth consecutive year.  Christie’s and its affiliates will host an interactive booth at the main entrance of Art Miami, displaying luxury residential properties from around the world.

Art Miami’s works on display will include Peter Anton’s CHOCO TOWER, a 10-foot tall sculpture of five chocolates stacked on top of each other that weighs more than 1,000 pounds. Made from painted aluminum, the sculpture will be on display at Stuttgart-based Galerie von Braunbehrens’s booth, part of an edition of three works, each painted in different colors.

The event will also unveil Uruguayan artist Pablo Atchugarry sculpture for the exterior of the project’s Oceanside tower. Atchugarry will debut a sketch of his piece, and guests will celebrate the opening of his family gallery in Wynwood, the Atchugarry Art Center.

Acqualina Resort & Spa’s AQ Bar is hosting an event on Thursday, in partnership with Fine Art Mia. AQ bar will be adorned with a collection of original contemporary masterpieces by famous American artists Andy Warhol, Roy Lichtenstein, Keith Haring and Jeff Koons and British contemporary artist Damien Hirst. Among them: Liz by Andy Warhol painted in 1964 and Alfred Hitchcock from 1983 and Damien Hirst’s Mickey in blue glitter from 2016.

Art Basel show partner Douglas Elliman is hosting a series of events, beginning with a property showcase in the Collectors Lounge of the art fair. Elliman is working with Artefacto, which is furnishing the New York brokerage’s new development gallery, and including a virtual reality presentation of new developments.

Elliman is also hosting a tour of “architecturally significant” new projects currently on the market in Miami Beach for Elliman and Knight Frank agents in town. On Thursday, the company is unveiling its fifth annual Elliman Magazine Art Issue at 1 Hotel & Homes South Beach.

Italian architect Antonio Citterio will be giving a talk at Design Miami on Wednesday with the home and design editor of Departures, discussing luxury architecture and design. Citterio is designing Arte, a 12-story, 16-unit condo building in Surfside being developed by Alex Sapir.

Arte is also placing an art installation through Sunday featuring a video by Sophia Hanover and Stuart Parr projected onto the building at 8995 Collins Avenue. And on Thursday, Sapir, Özlem Önal and Giovanni Fasciano are also hosting a private cocktail party with previously unseen art by Australian designer Marc Newson.

Cervera Real Estate is sponsoring Red Dot Miami and Spectrum Miami for the second year in a row. Cervera’s hosting “The Art of Living” collection at Red Dot Miami, beginning with a ribbon cutting ceremony on Wednesday and ending on Sunday at Mana Wynwood. The collection will showcase some of Cervera’s exclusive projects, including Aston Martin Residences Miami, Aria on the Bay and Elysee Miami.

In Edgewater, Pérez is unveiling the Paraiso District, a group of condo towers the Related Group recently completed. Artists Santiago Parra, Omar Barquet and Pablo Atchugarry will be at the event on Friday morning. Pérez and his wife, Darlene, are also hosting an invitation-only private breakfast and stroll through their art collection at his home in Coconut Grove this week.

The Bass Museum in Miami Beach is hosting a VIP reception Wednesday to celebrate the opening of The Haas Brothers: Ferngully during Miami Art Week. Also on view, Paola Pivi: Art with a view and Aaron Curry: Tune Yer Head.

In addition to hosting a number of offshoot art events and fairs in Wynwood and downtown Miami, real estate investor and developer Moishe Mana is having a birthday bash at his Wynwood complex on Tuesday. Mana and InList are hosting the party, starting at 9 p.m. and ending at 4 a.m. Lance Bass will MC the event, which is featuring performances by Cedric Gervais and others.

Nearby, broker and developer Tony Cho will have a pop-up experience at the Wynwood Gateway building called “Ignition.” The event, on Thursday evening, will feature artwork by Olivia Steele, Tyler Goldflower, J. Margulis and Dino Urpi in rooms of an on-site hotel, which will then be listed on Airbnb. The event will benefit the nonprofit Path of the Panther.

The nonprofit Berkowitz Contemporary Foundation is hosting a preview party for its new art-inspired building in Edgewater, where the foundation will showcase its art collection.

The project, designed by Rene Gonzalez Architects, will display Richard Serra’s “Passage of Time,” a 218-foot-long sculpture that will be installed in the courtyard. The 45,000-square-foot building was designed to incorporate an 80-foot-tall light installation by James Turrell’s “Aten Reign.” The building is slated to be completed in 2023.

On Friday, Valli Art Gallery is hosting a private event in Miami Beach’s Star Island. Valli Art Gallery is collaborating with Techrin Hijazi of William Raveis Real Estate to showcase post-war and contemporary Italian art aboard a 140-foot luxury yacht docked at 44 Star Island Drive. The estate is on the market for $18.4 million. The event will be hosted by Italy’s Radio 105.

Swire Properties’ Brickell City Centre is hosting its annual art fair, free to the public, from Thursday through Sunday. Featured works were curated and produced by Anthony Spinello in partnership with Swire Properties. Artists include Hank Willis Thomas, Emily Shur and Genevieve Gaignard.

Miami is getting a rare look inside the world of Banksy at the planned site of the Magic City Innovation District. The Little Haiti site just opened an exhibit with over 80 original works by the artist. The Art of Banksy is curated by Steve Lazarides, Banksy’s former business partner, and displays the world’s largest collection of the artist’s works, including the “Balloon Girl” and the “Flag Wall.”

An earlier version of this story incorrectly stated that the Brickell City Centre art fair only featured women artists. It’s open to all genders